Today, 34 to 38 Mulberry Street is a fine apartment building with Ng Fook Funeral Services on the ground floor. In the mid-nineteenth century number 38 held an Irish boarding house. 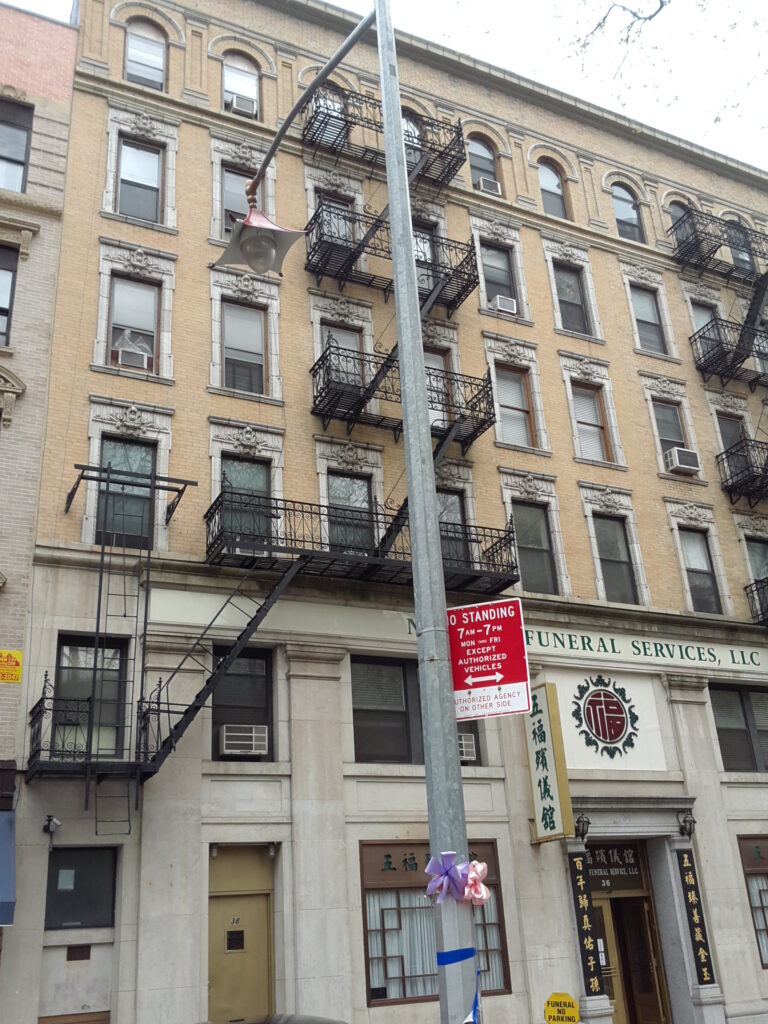 For us the story starts with John Harnett who went into the Emigrant Savings Bank at 51 Chambers Street on February 18, 1853. He opened account number 3597 and deposited $10.00. Perhaps to test the honesty or soundness of the bank he withdrew his $10.00 on March 22, 1853. The experience must have given him confidence because on May 11, the same year he went back and opened a new account (number 4320) with a deposit of $60.00. During the next three years, before he closed the account on February 11, 1856, John was to pass $336.16 through the account.[1] Luckily for us the clerks in the Bank kept copious notes on their depositors.

John Hartnett told the clerk in the Emigrant Savings Bank that he was a native of Ireland, from the Parish of Mallow in County Cork. He arrived in New York on May 28, 1840 by the ship Maryann Jane from Liverpool. His wife, Bridget Morrow, travelled with him. His father, John Hartnett and his mother, Margaret Barrett, were both dead. He had two brothers and a sister in the United States: Timothy, Thomas and Mary. The Hartnetts lived at 38 Mulberry Street; they were childless, and they ran a boarding house for a living.[2] But the Hartnetts once had a daughter.

When the Federal Census was taken in 1850, Bridget and John Hartnett were located in Ward 6 (this took in the south end of Mulberry Street, which included number 38). John was recorded as being 40 years old (born 1810), and his wife Bridget, 34 (born 1816). They also had a daughter Mary four years old, born in 1846, in New York.[3] In February 1853, John Hartnett told the bank clerk that he and Bridget were childless. Presumably little Mary had died. That would not have been uncommon in Mulberry Street at that time.

Sanitary conditions were notoriously bad in mid-nineteenth century New York. Young children and infants were especially vulnerable. The reporter and photographer Jacob Riis, whose office was on Mulberry Street, was especially active in reporting their misery.[4] The Citizens Association of the City of New York also took notice and organized an investigation into sanitary conditions in 1865. Doctor F. Thomas reported on Ward 6. He stated that Mulberry Street had more disease than average and that the rate of death in the Ward was 35 per 1,000 people. The report contended that a death rate above 17 per 1,000 was preventable.[5] As result of the report, sanitary conditions were improved, but too late to save the life of little Mary Hartnett.

The boarding house at 38 Mulberry Street that John Hartnett reported in1853 to the clerk at the Emigrant Savings Bank is corroborated by the United States Federal Census of 1850, which shows John and Bridget Hartnett as inn keepers.[6] Number 38 Mulberry Street was a brick building, and at a time when the majority of the buildings on Mulberry Street were still wooden frame buildings, this implies that 38 was a relatively better building and probably newer than the surrounding buildings.[7] Very likely the Hartnetts had an apartment with a room, or rooms to rent. The Emigrant Savings Bank’s description of John as keeping a “boarding house” is probably more accurate than the 1850 census’ “inn keeper”. This hypothesis seems likely especially when Jeremiah Hartnett appeared on the scene. 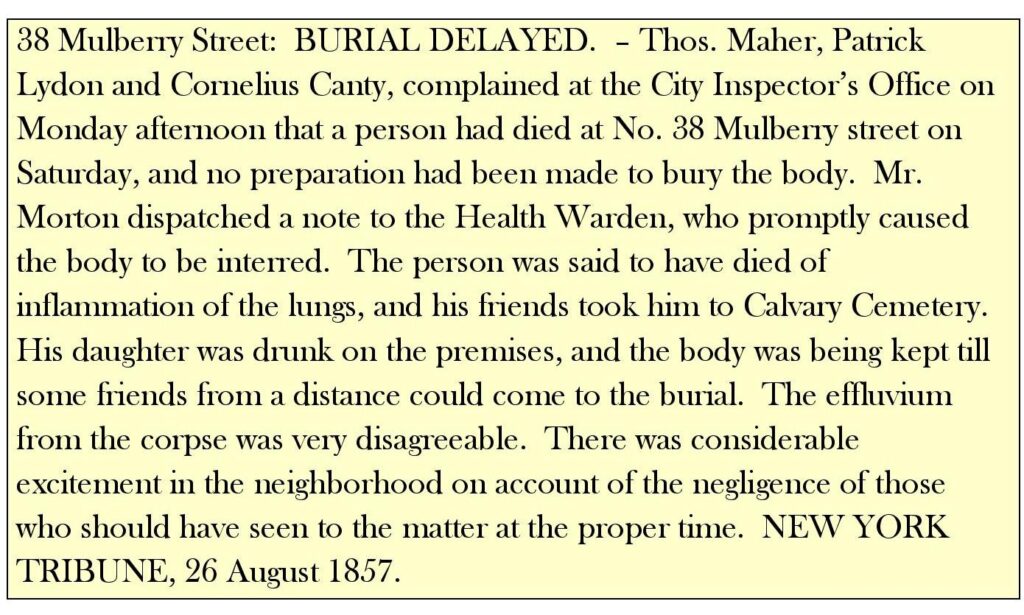 On November 2, 1859, Jeremiah Hartnett went into the Emigrant Savings Bank and opened account number 21,840. The bank clerk compiled Jeremiah’s details in the Test Book. From that we know that Jeremiah was born in Glantane, County Cork, just a few miles from Mallow. He arrived with his wife, Margaret Mahony, in 1850, on the ship George Washington from Liverpool. Exceptionally, this bank clerk did not make note of Jeremiah’s or Margaret’s other relatives. However, he did note that Jeremiah and Margaret were childless; that they lived at 38 Mulberry Street, and that they ran a rooming house.[8]  Not only does the New York State Census of 1855 corroborate Jeremiah’s information but tells us also his age,50, as well as Margaret’s age, also 50. Additionally, it tells us the names of the lodgers as well as their ages and professions. They were: Peter Carmody, 17, a plasterer; Thomas Nolan, 40, a labourer; Patrick Connors, 60, a cooper; and Edward Snooks, 18, a boot maker. All were Irish and had been in the United States at least one year. An important purpose of the census was to determine a resident’s eligibility to vote. All in the Hartnett household were classified as ‘aliens’ and thus ineligible.[9] 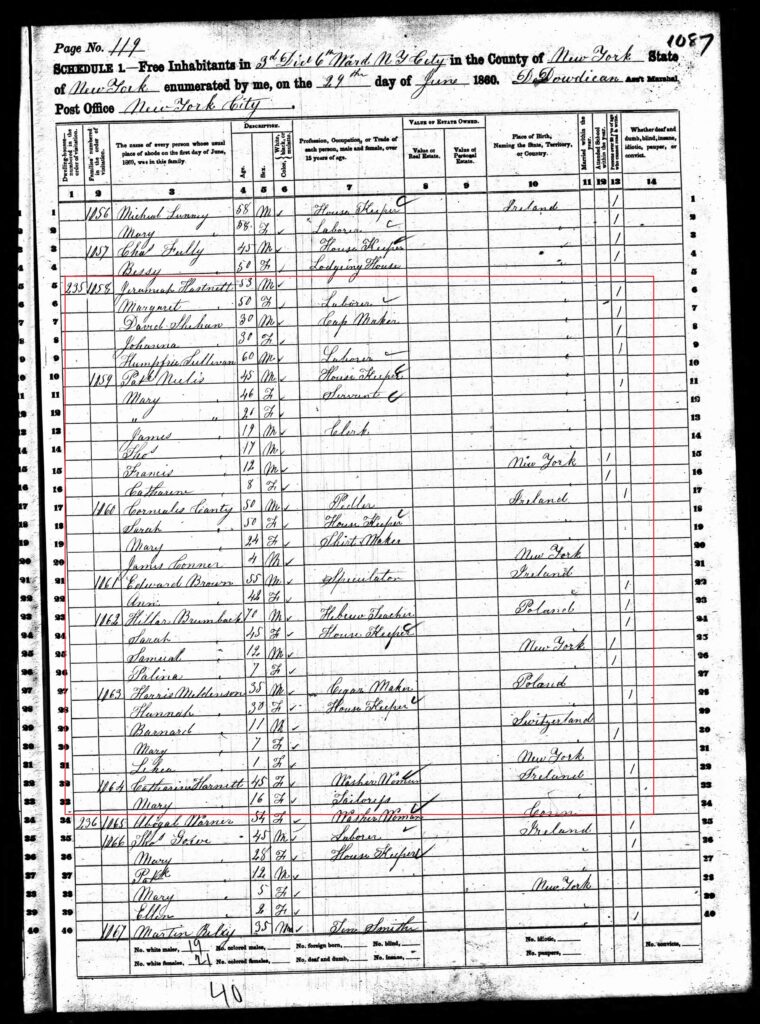 Jeremiah & Margaret Hartnett head the list of residents at No. 38 Mulberry Street in the 1860 US Census for New York City’s 6th Ward, a list that also includes Cornelius Canty, a pedlar who had complained about the unburied body in the building three years earlier. Note the two families from Poland: Hillar Brumback, a Hebrew teacher, and Harris Meldenson, a cigar maker. Ancestry.com [database on-line]

It is notable that all of the Hartnett’s tenants were male and single. It is also notable that the majority of the tenants had a skill of some kind; only Thomas Nolan is classified as a “labourer.”[10]  The Hartnett lodgers would seem to conform to Robert Ernst’s view that “Boardinghouse dwellers were predominately male…. Single men found it cheaper to rent rooms in tenements, where they shared their quarters with fellow countrymen.”[11] However, 38 Mulberry Street conveys a more nuanced picture.

Lodgers in the apartments at 38 Mulberry Street were more the rule than the exception. Of the 17 apartments in the building, according to the New York Census of 1855, eleven had lodgers, and the lodgers are all named. Some of Jeremiah Hartnett’s neighbors give us a good idea of the lodgers at 38 Mulberry Street. Mary Regan, 55, a widow living with her son William, 14, had six lodgers, including two young men as well as a married couple with two young children. Another neighbor, Matthew Dillon, 45, a widower, lived with his daughter Bridget, 9 years old, and two lodgers: Mary Murphy, 33, a widow, and her son Daniel, six months old. Of the 11 apartments housing lodgers, two were headed by women: Mary Regan mentioned above, and Catherine Clancy, 35, married with three daughters all with the last name Melly, but no mention of her husband. She had lodging with her a young widow, Mary Toher, 29, and her 3 year old son, Owen. Both women were seamstresses. At least three of the lodging houses were headed by young married couples, presumably saving money to move on to better things. Some of the apartment dwellers who did not declare lodgers nevertheless housed other relatives in what sometimes might be called distressed circumstances. For example, Peter Dugan and his wife had four children, but they also housed Peter’s brother Charles, a labourer and a widower with a daughter 12 years old.[12] 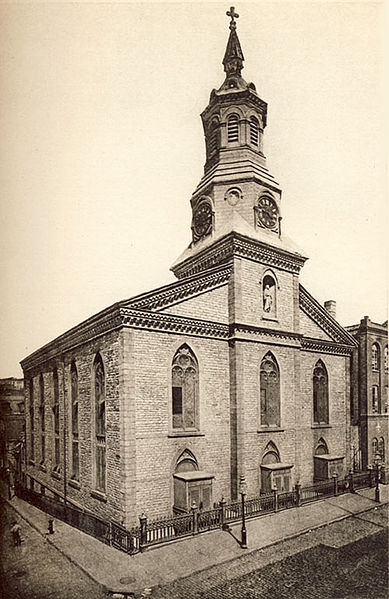 The Roman Catholic Church of the Transfiguration on Mott Street was just around the corner from 38 Mulberry Street.

So, yes, the lodgers got cheap housing and cramped living conditions that gave them an opportunity to save money, but there was more than that going on. The renters also made some money and may have had an asset that was their defense against destitution. The widows, especially those with young children, may have seen this as a lifeline. But still more, the boarding house was also a source of companionship and a means of keeping a family together. Catherine Clancy, with her three young daughters was not only providing room and board to a young widow, Mary Toher, and her young son, she was also providing companionship and getting a live-in workmate. For most it seems to have been a secondary source of income. Indeed, Jeremiah Hartnett in the New York census of 1855 is listed as a laborer as well as keeping lodgers.

Unfortunately, there is no trace of John Hartnett or his wife Bridget in the New York State Census of 1855, or the Federal Census of 1860. However, Jeremiah and his wife Margaret are recorded in the Federal Census of 1860. They were living in New York in Ward 6, and they were described as running a lodging house and now had three tenants: David Sheehan, 31, a cap maker; Johanna Sheehan, 31, and Humphrey Sullivan 60, a labourer and unmarried. Johanna Sheehan is not given a profession and neither she nor David are recorded as married, presumably they were brother and sister. All three are recorded as Irish, and not able to read or write.[13]

Intriguingly, John and Bridget Hartnett show up at the Emigrant Savings Bank again on April 28, 1864 when John Hartnett applies to open another account, this time for himself and his wife Bridget. The clerk assigned account number 40,346 to them but did not take any other personal information, he did however, take Bridget’s mark; an ‘X’, and noted that they were living at 20 Mulberry Street and running a rooming house.[14] There is no record of the deposit they made.

Whether John Hartnett abandoned 38 Mulberry Street for a better or cheaper apartment at number 20 Mulberry Street remains a mystery as does the relationship between John and Jeremiah. It is likely that they were brothers or at least cousins. What is clear is that they both had an affinity for boarding Irish lodgers.

[2] Emigrant Industrial Savings Bank, Test Book – John Hartnett (also spelled John Harnett) account 4320 and 3597, John Hartnett has two entries in the Bank’s Test book, all of the above information is given in both entries except for the date of arrival of his ship, in one case he states the date of arrival as ’13 years ago’ and in another ‘May 28, 1849’. It is impossible to know if this was a lapse of memory on the part of John or a mistake by the Bank’s clerk. I have gone with the 1840 date because John and Bridget show up in the Federal Census of 1850 with a daughter Mary who was born in New York ‘four years ago’ (i.e. 1846). But by 1853 John states that he and Bridget are childless. Presumably Mary died.

[5] Report of the Council of Hygiene and Public Health of the Citizens Association of New York, D Appleton and Company, 443 & 445 Broadway, New York, 1865

[7] New York State census 1855, Ward 6, New York, see also the Report of the Council of Hygiene and Public Health of the Citizens Association of New York, noted above

1 thought on “A Boarding House at 38 Mulberry Street”