Killybegs is the largest fishing port in Ireland. It is situated in the north-west of the country in County Donegal. Samuel Lewis in the nineteenth century described it as being “situated at the head of a beautiful and safe harbour, to which it gives its name and at the base of a vast mountainous tract extending northward…the harbour is nearly circular in form, well sheltered, and accessible to ships of considerable burden”[1] James H. Tuke, a philanthropist and writer on the state of Ireland in the nineteenth century, said that “the importance of the harbour of  Killybegs cannot be overestimated, it is the only harbour in a rocky and dangerous coast.”[2] 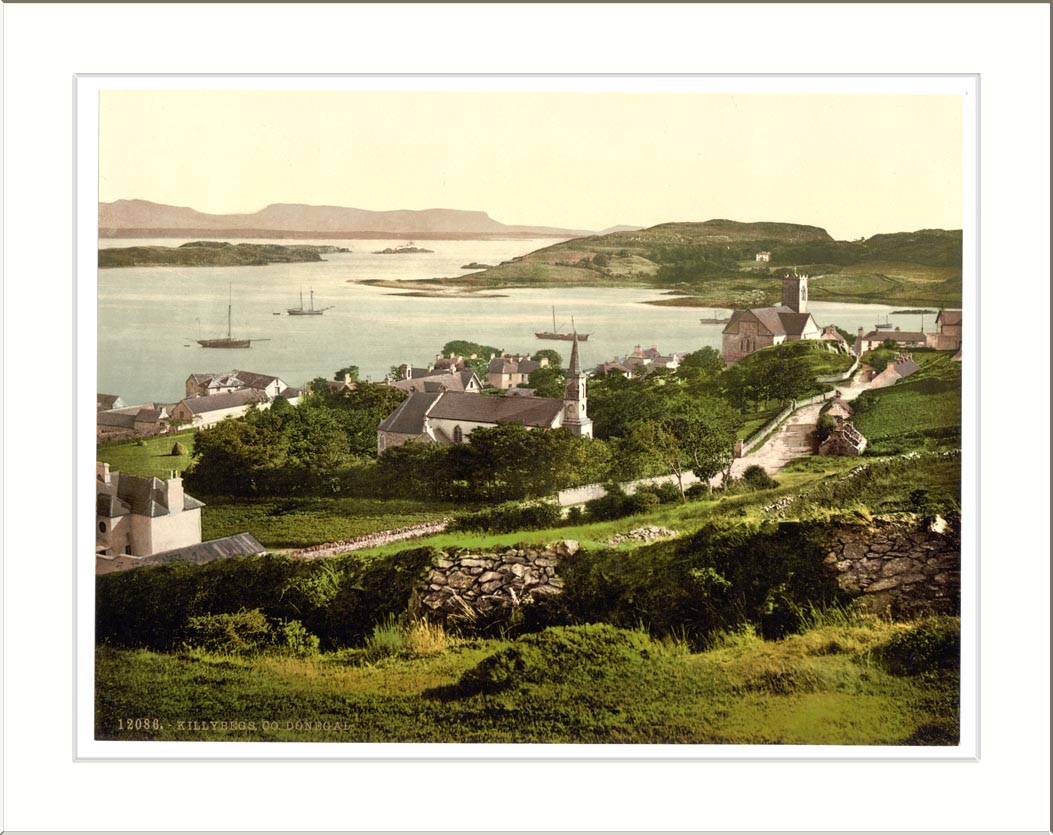 With such a natural advantage one would expect Killybegs to have a thriving fishing industry. Indeed, it does now have such an industry, but its development required capital and investment that was not available to mid-nineteenth century Killybegs. The industry also needed a good communications network and Killybegs lacked the necessary roads and rail services to get fish quickly to market.[3] William L. Micks, another nineteenth century observer and developer of the fishing industry in Ireland, noted that “earnings in addition to fish eaten by local families varied from £2 to £10 a year per family in…Killybegs”.[4] Consequently, in the mid-nineteenth century fishing in Killybegs was mainly a supplement to eking a living from the land.

Around Killybegs the land holdings were small and the land was generally poor.  Killybegs gave its name to a parish which was divided into upper and lower Killybegs.[5] It comprised approximately 30,000 acres of which Lewis estimated that two thirds were mountain and uncultivated land.[6] Jim MacLaughlin asserts that almost two-thirds of the houses around the costal enclaves of Killybegs and Dungloe had valuations of £5 or less in 1841.[7] So, even with grazing rights to the uncultivated mountain lands, such small holdings made for a very poor living unless there were some other sources of income. 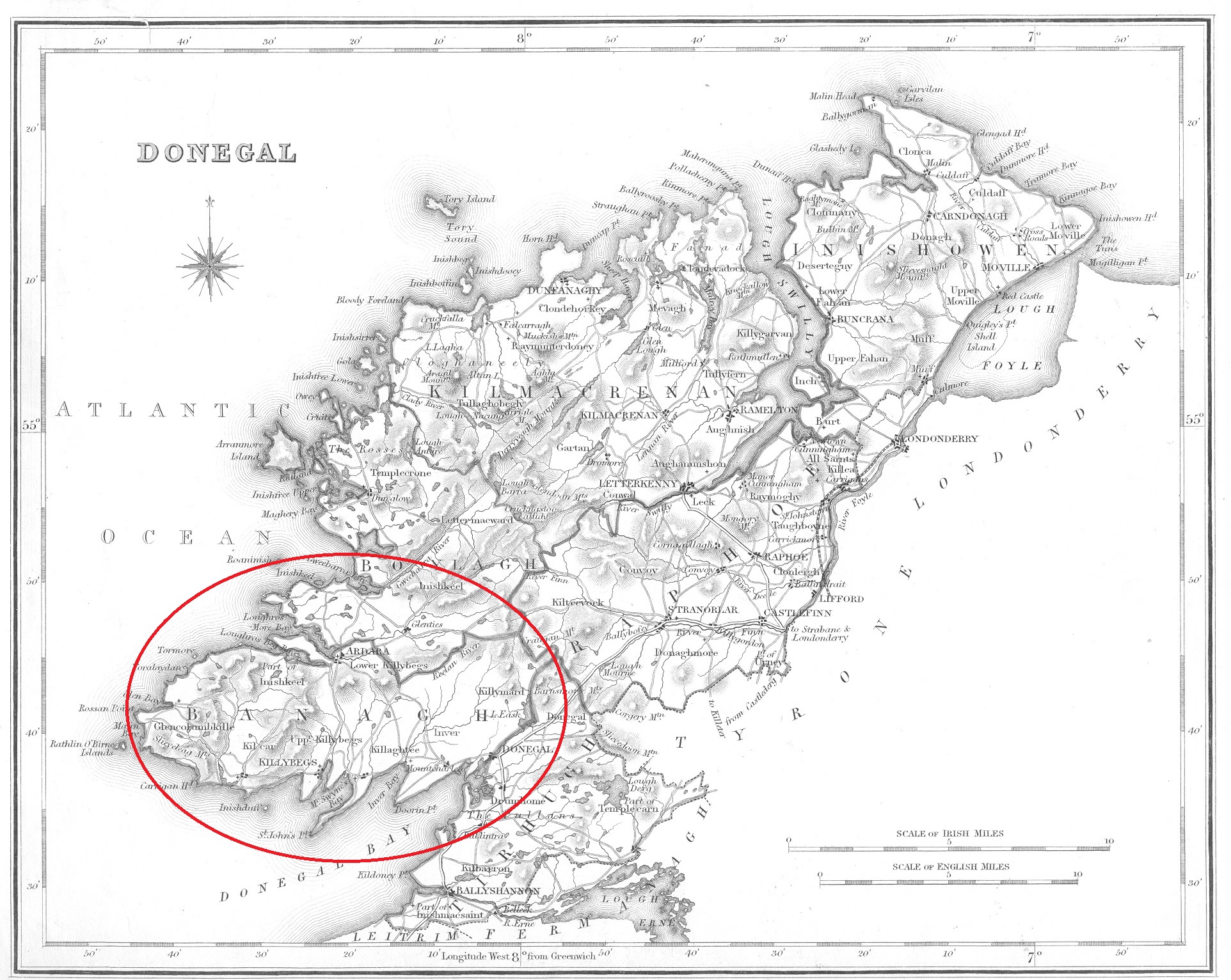 Map of Co. Donegal from Samuel Lewis’ Atlas of the Counties of Ireland (London, 1837)

The main other traditional sources of income were: fishing, previously mentioned; sales of eggs; weaving and knitting; and earnings from migratory seasonal work. Fuel was provided by cutting and drying peat which was plentiful. Although the export of eggs was very important, they were sold “at ridiculously low prices” for want of efficient transport.[8] Donegal had a fairly well established weaving and knitting industry. However, it was largely a cottage industry, and like fishing, carried on part-time. Mechanized technology developed in England was making it difficult for home-based weavers and knitters everywhere to compete.  Consequently, they saw their incomes fall. The main problem in the Killybegs and surrounding areas was that there was a lack of industry for a population dependant on small agricultural holdings.[9]

Because of this lack of industry and because of their small holdings, Donegal people were accustomed to supplementing their income by migrating during the summer months. They would typically go to work on the harvest in England or in other parts of Ulster.[10] Thus, with income from various sources the people managed to survive, but bad seasons often reduced them to the verge of starvation, even in post-famine years,[11]  and living standards were always low.

Tuke complained that the people were poorly housed in squalid conditions, “The mere cleansing of the houses and the removal of the cattle, filth &c., from the living room would effect a marvelous transformation”, he wrote in 1889.[12] Writing about the neighboring parish of Inishkeel in the 1830’s the Ordinance Survey Memoirs observed that there was little opportunity for employment, and that in a family of six sons the usual custom was for the father to divide “the already too scanty farm into six parts, and (he) thus creates six families of beggars, instead of apprenticing five of his sons to trade and giving his farm to number one.”[13]  Conditions deteriorated significantly during the famine years of the 1840’s. In the 1850’s a slow recovery began, but there was still no industry. However, the Famine had taught the rural Irish a hard lesson: that potato failure and subdivision of their land could lead to starvation. From now on, the Irish were more inclined to bequeath their land to the eldest son and the other siblings had to fend for themselves.[14] It was from these conditions that the majority of emigrants from Killybegs left in the mid-nineteenth century.

Killybegs and surrounding areas in the second half of the nineteenth century were seen to be “overcrowded”. In other words, the available sources of income were not sufficient to support the population.  Tuke estimated the population of Killybegs in 1880 to be 2,150 people, comprising 424 families.[15]  The development of resources, such as an improved infrastructure and promotion of the fishing industry and agriculture were slow in coming, so emigration was seen as a solution.[16] Various public and private schemes to encourage emigration were put forward and some small-scale schemes were carried out, but the main impetus came from the people themselves.

Emigrants sent home accounts of their experiences in America. They wrote of the opportunities that America offered. They often sent the passage fare to their siblings and this became part of the solution.

They left in droves. In 1851, the population of post-famine county Donegal was estimated to be 255,158. By 1861 it had fallen to 237,395.[17] Kerby Miller estimates that between 1851 and 1860, 37,941 people emigrated from county Donegal.[18] This exodus represents nearly 15% of the 1851 population. These were the post famine years when one would expect the wounds of the famine to heal and the population to stabilize. But this was not to be and the hemorrhaging was to continue for another 100 years.

[2] J. H. Tuke, The condition of Donegal, W. Ridgway, London, 1889, 19. Tuke, an Englishman,  Quaker, Banker and Philanthropist, became concerned about conditions in Ireland during the famine years. He visited the country many times from 1847 through the 1880’s and wrote extensively about his observations there.

[7] Jim MacLaughlin, The Management of Famine in Donegal in the Hungry Forties, from Atlas of the Great Irish Famine, Cork University Press, 2012