The civil parish of Lissonuffy is located in northeast Roscommon, a landlocked county in the west of Ireland, and is comprised of 42 townlands.[1] In the mid-nineteenth century, the parish consisted of some 4,600 inhabitants on 5,022 acres. During this time period, the land was chiefly used for growing crops. The land around Lissonuffy also possessed an extensive amount of stone, used to build millstones, which were sold in neighboring counties.[2]

The parish is situated on the eastern side of the Slieve Bawn mountain. According to Isaac Weld in his Statistical Survey of the County of Roscommon, published in 1832, the mountain was so named because sandstone rock gave it a white appearance (Sliabh Bán is Irish for White Mountain).[3] In his Ordnance Survey letters written five years later, however, the great Irish scholar and topographer John O’Donovan disputes this, saying, “the name of the mountain is not Sliabh Bán, White Mountain, but Sliabh Bághna, the mountain of Baghna, which was probably the name of one of the Firbolgian chiefs of the district.”[4] Flat bogs stretched along the base of the mountain, constituting the largest expanse of bog anywhere in the barony of Roscommon.[5]

Lissonuffy lay three and a half miles southeast of the market town of Strokestown, the seat of the Mahon family. In 1667, Captain Nicholas Mahon was awarded 2,700 acres by Charles II in appreciation for his loyalty to the crown. In 1678, he was awarded an additional 3,000.[6] A large portion of the land on which Lissonuffy stood was thus owned by the Mahon family. On acquiring this vast tract, Nicholas Mahon set about building a residence and alongside it, a town, soon to be named Béal na mBuillí (the pass of the ford of strokes), which was later Anglicized to Strokestown.[7] He was given a patent for a weekly market and bi-annual fairs, with all profits going to him and his family.[8]

But while Nicholas Mahon was responsible for his family’s initial good fortune, his grandson Thomas Mahon “created modern Strokestown.” After inheriting the estate in 1734, he secured a seat in the Irish Parliament, added additional fair days, built a new market house and worked to enhance the town’s principal industries of brewing, linen production and milling, as well as to improve the output of its farmlands. Mahon also built a 147 foot-wide main street, which ran from the Church of Ireland on one end of the town, to the gates of the Mahon demesne on the other. He rebuilt the family home into a Palladian mansion, called Bawn House (or White House), and cultivated the demesne. “Within thirty years of first taking over, Thomas had turned Strokestown into a successful regional market town…”[9] 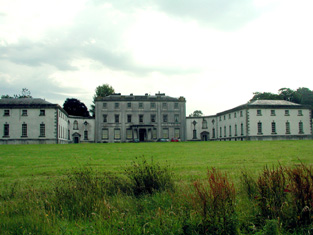 Strokestown was a center of activity for people from miles around, most certainly those of Lissonuffy parish, who like others would flock to the town, particularly on fair days. On these days, Strokestown, “provided much excitement for the countrymen, with the crush of cattle and wagons in the main street, peddlers of ribbons, trinkets, an old clothes, children ricocheting among the legs of men and cattle, beggars (in ever greater numbers), tinkers, musicians, booted men on horseback, farmers and factors haggling in the public houses, and, the largest numbers, peasant men and women in town to find and pay the shillings they owed and, in good seasons, to purchase their ounces of tea and tobacco in the shops.”[10]

The Mahon family was awarded a peerage in 1800 for their support of the Act of Union, with the then current head, Maurice Mahon, named the first Baron Lord Hartland. But, as the 19th century progressed, the Mahons fortunes began to decline. Profligate spending and extensive land purchases combined with an economic slump in Ireland led to financial trouble for the estate.[11] In the years before the famine, things only got worse as the population steadily rose and the estate was more subdivided.

Cottiers worked on small plots overseen by middlemen and large farmers who held long-term leases from the estate. As Isaac Weld, noted, however, the tillage system of the small farmer was appalling, and little was done to improve the value of the land, with poor drainage limiting both what could be planted as well as the productivity of what was planted. “Landlords, in giving new leases, seldom look to the capabilities of the lands, or take into consideration the improved rents which might, and certainly ought to be obtained, by expending in the first instance, from their own purses, a sum of money in draining.”[12] This convergence of forces led to a dependence on the potato, a “hardy tuber” that required minimal labor to cultivate and could feed an entire family on just a small plot of land. By the time the potato blight struck mid-century, this dependence, which “had long enabled the Irish pauper to survive conditions that might not otherwise sustain him,” led to disaster for those living on Mahon lands.[13] 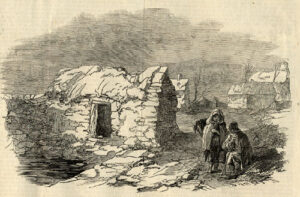 As the situation worsened, all throughout the estate were “examples of the most abject misery, whether the housing or the clothing of the lower classes be considered.” Things would have been particularly bleak in the parish of Lissonuffy as “the worst cabins, as usual, are found in the vicinity of the bogs, whether the poorer classes are attracted by the greater facility of procuring at least one comfort of life, that of fuel.”[14] But, before the potato blight destroyed the first crops in 1845, those with land had at least some ability to sustain themselves. The landless cottiers were the worst off of all. Struggling to survive, they were often reduced to begging, and a government commission called them “the most wretched amongst the many wretched classes in Ireland.”[15] Richard Griffith’s land valuation survey, compiled and published in the mid-19th century, lists a large number of landless cottiers in Lissonuffy parish.[16]

When the potato blight came to Ireland in 1845, circumstances in Lissonuffy and the surrounding environs made it ripe for calamity. But the true extent of the eventual devastation really hit home the following year when the potato crop failed once again. During the famine years, Major Denis Mahon owned the Mahon lands. A cousin of the original Mahon family, he had inherited the vast property when the last of that line died without an heir (the title Lord Baron Hartland also died with them).[17] But along with the property, he also inherited all of the financial problems as well as an impending famine. 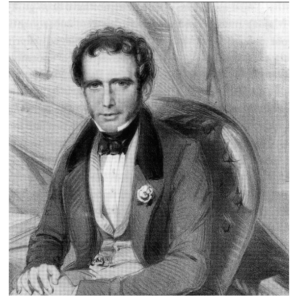 Major Mahon was not the worse of the landlords overseeing Ireland at that time, and there were some relief efforts in Strokestown. At the height of the famine, a soup kitchen in Lissonuffy fed some 2,371 tenants on its busiest day.[18] But these schemes proved insufficient, and when wages for public works projects were cut, under direction from the British Parliament, agitation and rental strikes soon sprung up as tenants dealt with their increasing hunger and desperation.[19] Major Mahon departed Ireland to spend the winter of 1946-47 in England, leaving control of his affairs to John Ross Mahon (no relation). As overseer, Ross Mahon was tasked with coming up with a solution for the spiraling situation. He suggested subsidized emigration of 2/3 of the tenants. The remaining tenants would be given larger holdings where they could grow more profitable grain crops, which would not be harmed by blight.[20] But Major Mahon felt the scheme was too expensive so instead suggested a rent reduction for the “industriously inclined.” For although he was generally viewed as a relatively good landlord, his “charity was always conditional.” He felt that while some tenants certainly could not pay their rent, others simply refused to. He also supported the seizing of cattle in order to induce payment of rent.[21]

But the situation soon became untenable and evictions multiplied. Finally, when the poor rates were increased, Major Mahon agreed to a scaled-down version of Ross Mahon’s emigration proposal, seeing it as the most economical solution. In the end, Major Mahon paid for the passage of nearly 900 tenants on four vessels. The first batch of tenants to leave were from 14 different townlands, and about half were from Lissonuffy. They made their way from Strokestown to Dublin and then on to Liverpool before finally setting sail on the ship Virginius on May 29, 1847, bound for Quebec.[22]

But the voyage of the Virginius proved ill-fated. Rumors abounded of a shipwreck, and those left behind believed their friends, family and neighbors had died at sea, blaming Major Mahon and his parsimony for the tragedy. There was, in fact, no shipwreck, but as Robert Scally noted, the fate of the passengers was nearly as appalling:

“The rumor of shipwreck was false, although the real fate of the emigrants on their arrival in Canada at the infamous Grosse Isle quarantine would have proved at least as infuriating in the townlands: of the nearly 500 emigrants aboard the Virginius out of Liverpool, 158 had died at sea and the rest were described by the Canadian medical officer as “ghastly, yellow-looking specters” as they emerged from the holds. No more than 6 or 8 were reported well enough to disembark on their own. Together with the ships chartered by Lord Palmerston to send out his Sligo tenants in the same year, the Virginius became the emblematic image of the ‘coffin ship’ as it took shape in the first years of the famine.”[23] 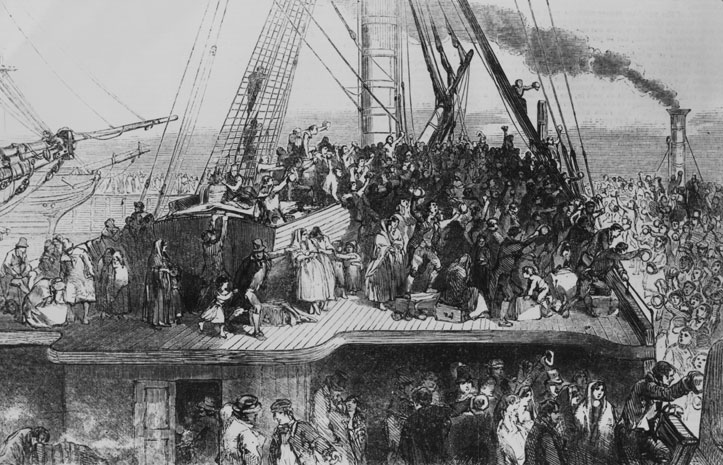 The story of the Virginius would have a deep and far-reaching effect. When Major Mahon was shot and killed on November 2, 1847, as he rode his carriage back to Strokestown, it was said to be partly in retaliaton for this, “for in the minds of the tenantry, not unnaturally, their desperate suffering and the heartlessness of eviction were inseparable links in a causal chain.”[24] The assassination would reverberate throughout Ireland for years with some feeling it showed “the inevitable consequences of the brutal evictions that landlords were conducting throughout the country,” while others felt it “revealed that the Irish peasant was beyond the reach of civilization.”[25]

Closer to home in Lissonuffy, though, the assassination would be just another grim event in a devastating succession of them. In nearby Ballykilcline, a townland northeast of Strokestown, a protracted rent strike and tenant struggle had been given the name “rebellion” by those living for miles around.[26]   Lissonuffy would not be immune to similar agrarian unrest.  In March of 1845, in an agitation involving some 100 tenants and their landlord, police would shoot and kill a local man.[27]

Over the course of the famine, the population of Lissonuffy fell 38.3 percent [28] and emigration would continue unabated as the famine intensified. For although the Virginius illustrated the risks one took in leaving, it was also patently clear that to stay meant starvation and, in many cases, death.