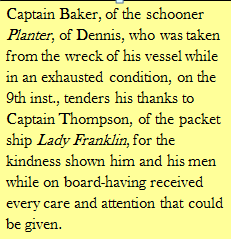 The business of moving immigrants changed rapidly during the mid-19th century. Early passage migration was irregular and ancillary to the trade of mercantile goods. Individuals, or sometimes groups of people, would barter passage from merchant ship captains. Change began to emerge in the 1830s when some shipping lines started to recognize the potential viability of a human transportation market. This realization, and the development of the ‘immigration industry,’ did not occur overnight but instead was a gradual process. While the birth of the human transportation market in the 1830s, ‘40s, and ‘50s created more opportunities for individuals looking to emigrate, there were many problems with the industry, particularly a reputation for poor conditions on ships. This began to change, however, when men like Samuel Thompson began to build larger packet ships with the purpose of transporting large amounts of passengers more carefully.[1] These larger packet ships were not perfectly safe, as transatlantic shipping is inherently dangerous, but they demonstrated a remarkable improvement over earlier vessels.

One such vessel, the Lady Franklin, was launched in 1851.[2] The 1283 ton packet ship sailed a Liverpool-New York route and consistently carried roughly 400 to 500 passengers. Conditions on the ship were not always perfect. For example, on arrival in New York on September 14th, 1851, the ship’s Captain Samuel Yeaton recorded that five of the ship’s 543 passengers died during the voyage: two died from pneumonia, two from ship’s fever, and one from diarrhea.[3] On another voyage, the ship recorded 13 dead.[4] While this was certainly horrible for those involved, especially individuals like Sarah Diggery, a future nurse at the Emigrant Hospital on Ward’s Island and the wife of one of the deceased,[5] it paled in comparison to some of the other ships of the era such as the Washington, which lost 81 out of 952 passengers on one voyage, or even the newly built Isaac Webb, which lost 77 out of 773 passengers on another one.[6]

There may be many possible reasons for the lower death rate on the Lady Franklin as compared to other ships. The policies of individual shipping lines and captains were a key factor. For example, while the Isaac Webb was 76 tons larger than the Lady Franklin, it carried almost twice as many passengers. Also, the Lady Franklin was noted for the speed with which it completed the transatlantic passage. It made the eastward leeward passage to Liverpool in less than 14 days,[7] a time comparable to contemporaneous steamships,[8] while it outsped many other ships-of-sail on the windward journey from Liverpool to New York.[9] Not only was the ship able to outspeed many of its counterparts, but it was also able to weather storms well enough to provide aid to damaged ships along the way. During the December 1853 passage, the ship was able to render assistance and supplies to two different damaged vessels despite losing three crew members in a strong storm. Good preparation, expediency, and ample provisions allowed ships like the Lady Franklin to avoid some of the problems facing the other ships.[10] This focus on organized and humane transportation was one of the early success stories of the emigrant business of the 1850s. The challenges that these ships and their passengers faced did not immediately die during the 1850s, but newer, more organized, quicker and less overcrowded ships like the Lady Franklin demonstrated marked improvement. The final improvement in the 1850s was the invention and the implementation of the steamship, which was to decrease the time spent on the open ocean, further decreasing the threat of disease.

Perhaps the most famous voyage of the Lady Franklin took place in the spring of 1856, when it was chartered by the philanthropist Vere Foster to bring 71 young women from the Ardee area of Co. Louth to America, 11 of whom intended to settle in New York.  It made the Atlantic crossing in just nine days and the girls told Castle Garden officials that they “had nothing to complain of.” [11]