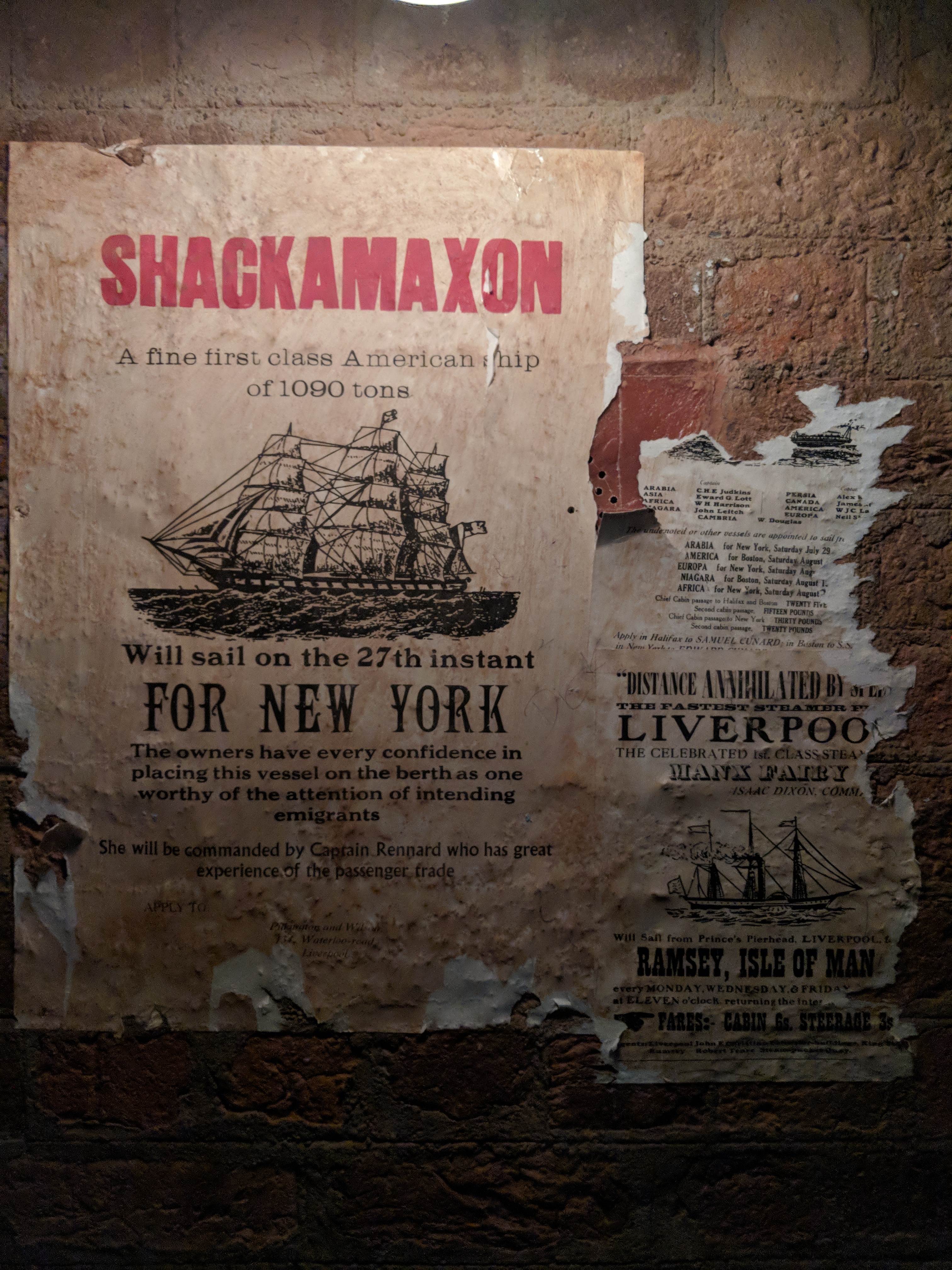 Already robust from a legacy built on the Atlantic slave trade, privateering and the importation of American cotton, Liverpool was ready to transition to a new business venture in the early 19th century- the movement of Irish emigrants.[1] Three Irish residents of New York’s 12th Ward travelled on the American packet ship Cambridge: Co. Tipperary natives Mary Kennedy in 1846 and John Dwyer in 1850, and Maria Ray from Co. Tyrone in 1848.[2] All started their emigration journey in Liverpool.

Liverpool was equipped to fill the old slave trade offices of Goree Piazza with shipbrokers, commission agents, provision merchants, emigration agents, and porters to support the emigrant dependent economy.[3] In 1850 alone, emigrants spent £581,315 on passages from the port.[4] From 1815 onward “fortunes were made by the early spectators of emigration.”[5] A “parasitic life” of greedy and deceptive venders formed on the docks of Liverpool as people took advantage of the opportunity to turn a quick profit from Irish emigrants who were increasingly desperate for food, shelter, and security. Before Irish emigrants even left Liverpool, it was clear they were already an integral part of the local economy through the pubs, shops, and boarding houses they used before embarking for the journey to America.[6]

Before boarding the ship, emigrants such as Mary Kennedy, Maria Ray, and John Dwyer would have been subjected to a quick medical inspection that consisted of showing their tongues to doctors. Rarely was attention paid to more serious conditions during these quick visual scans. After tickets were hastily stamped, the trip began.[7] As one witness reported on watching Irish emigrants leave, “There was no crying or lamentation. All was delight at having escaped the deadly workhouse.”[8] Another reported that “there had been no fond leave-taking, no farewells to England, no pangs of parting.”[9]

The Cambridge, an American Black Ball packet ship, could carry a variety of goods and people given its capacity of 799 tons.[10] Her masters were Captain G.S. Peabody, Captain J.W. Abeel, and later Charles H. Marshall.[11] In 1842 the Freeman’s Journal reported that “[T]he Cambridge packet ship brings advice from New York” regarding tariffs and the “national benefit from the very abundant crops of cotton and corn this season.”[12] In 1846 The Cork Examiner stated, “[T]he packet ships Cambridge and Joshua Bates bring news from America —  […] [T]he former states a decline in flour.”[13] In 1847, Irishman Rohin [sic] Sullivan was arrested by Constable Wright on the Cambridge after fleeing Ireland via Liverpool in the hope of escaping punishment in America for “roasting his child.[14] 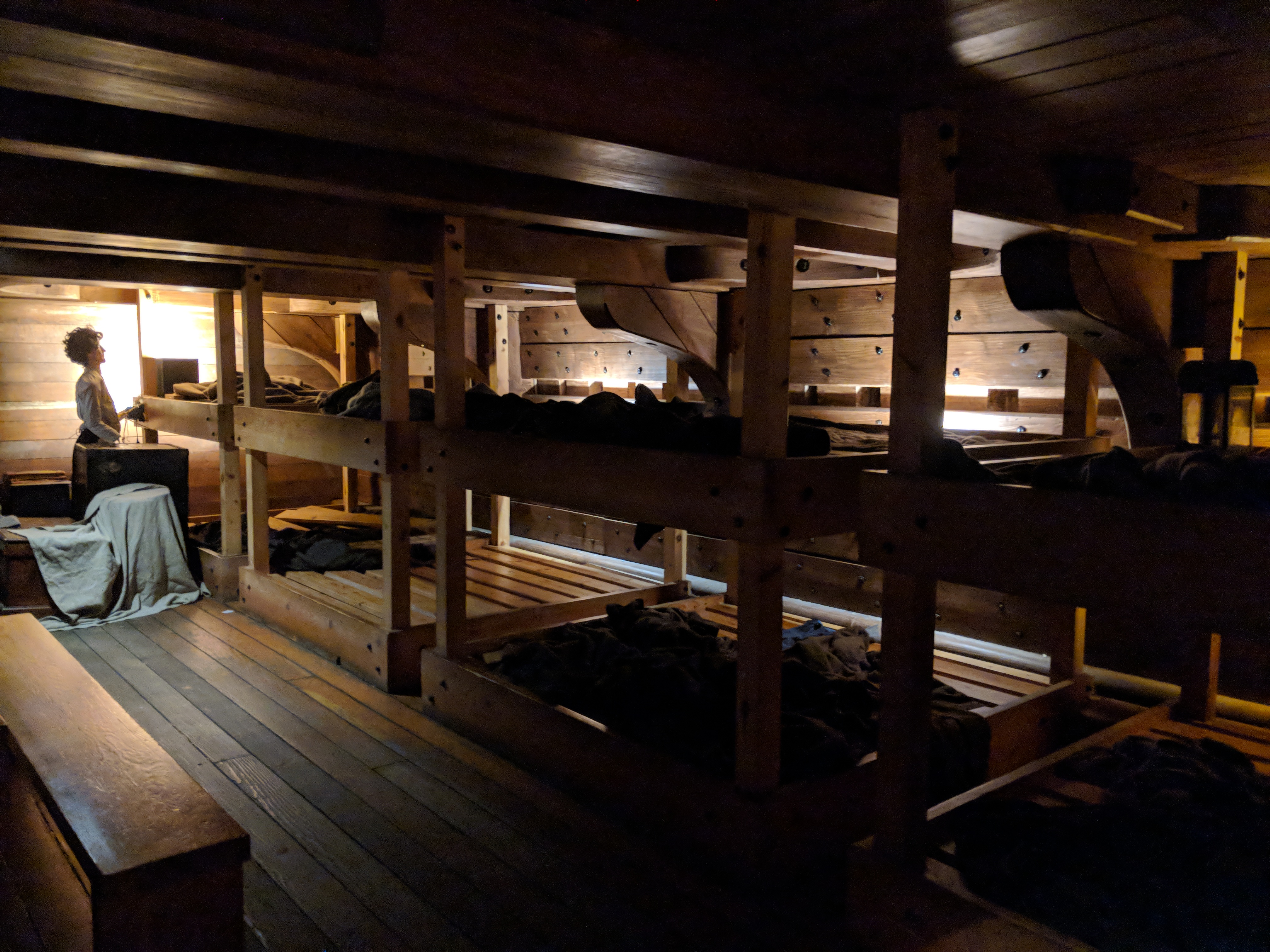 Recreation of the ‘tween decks of a trans-Atlantic packet ship in the mid-nineteenth century like that of the Cambridge. Photo by Marion R. Casey, June 2019, Merseyside Maritime Museum, Royal Albert Dock, Liverpool.

The more common experience on the Cambridge, however, was the movement of Irish emigrants to major ports in the United States. Many Irish emigrants, such as twenty-eight-year-old Maria Ray took the Cambridge to start their new life in America.[15] Despite being a Black Ball ship, different agency companies would charter the ships for their emigration purposes. Tapscott’s Line called the Cambridge “a superb packet.”[16] Harden & Co. described their ships, including the Cambridge, as “first class, coppered, and copper-fastened. Fast sailors and commanded by men of experience in the trade.”[17] Twenty-year old John Dwyer’s trip on the Cambridge had 231 passengers on board, where each bunk held two people.[18] The trip was long, usually five to six weeks;[19] John Dwyer left Liverpool on December 3rd, 1849 and five weeks later on January 9th, 1850 arrived in New York.[20]  Ships were often riddled with disease. Despite the seven Passenger Acts that came into law from 1842 to 1855, including the 1855 law which required a doctor to be on board a ship with 300 or more passengers, illnesses such as typhus and smallpox were common.[21] For this reason the Cambridge, along with the other packets chartered by Harden & Co, offered free fare to doctors traveling to the United States.[22] For those who survived the journey, land and fresh air was a welcome and joyful sight. But life in New York had its own difficulties as Irish emigrants, despite their newfound opportunity, faced hostilities in the United States.

After disembarking on the piers of New York, Irish emigrants encountered people similar to the “parasites” of Liverpool: “cheats, strawbosses, employers, healers, landlords, recruiting sergeants, bandits and politicians of the new world.”[23] Organizations such as the Irish Emigrant Society (from 1844) and the Commissioners of Emigration (after 1847) provided help where they could.[24] Among the men active in both was another Twelfth Ward resident, Andrew Carrigan.

[4] Coleman, “Liverpool and the Last of England,”68. The value of which is more than £61 million or $75 million, measuringworth.com.

[23] Scally, “Liverpool Ships and Irish Emigrants in the Age of Sail,”8.