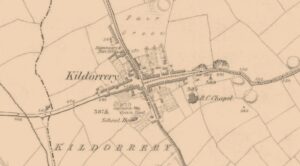 A devastating period of Famine and its aftermath in Ireland overlapped with the foundation in New York City of the Emigrant Industrial Saving Bank (EISB) in 1850. Many Irish emigrated to large American cities as a means of survival or for the opportunity of a better life. Although places like the Five Points and other crowded downtown neighborhoods overwhelm much of the historiography about the Irish in New York at this time, over 145 Irish-born EISB account holders were residing in the far northern Twelfth Ward during its first decade of operation from 1850 to 1860.[1] The largest number of these (21) hailed from County Cork in the southern province of Munster. Among the Cork immigrants, three came from the civil parish of Kildorrery.

Both a parish and townland in north Co. Cork, the town of Kildorrery is located in a triangle nearly equidistant to Mallow, Mitchelstown, and Fermoy, about twenty-seven miles from Cork City and 137 miles from Dublin.[2] Situated on a hill, it had roads connecting it with other notable towns as early as the eighteenth century, like Clonmel (in Co. Tipperary), Doneraile, Kilmallock and Fermoy shortly afterwards.[3] The nearby mountain ranges of the Galtees, Knockmealdown, Slievenamon, and the Ballyhouras are visible from the main street in town on a clear day.[4] Kildorrery’s strategic geographical location is indicated by thirty historic ringforts in the area that pre-date the twelfth century. In the late eighteenth century, the 2nd Earl of Kingston undertook an estate improvement scheme that gave Kildorrery a wide street and two-story houses.[5]

Kildorrery’s economy was largely based on agriculture, especially dairy farming. Fairs were held four times a year to facilitate the sale of and trade in cattle and horses; but “pig fairs were held on the first Wednesday of every month with a butter, fowl and general market every Wednesday.”[6] In 1837, nearly 600 people resided in the town, with almost 2,000 more in the surrounding parish.[7] St. Bartholomew’s Catholic Church was built in the adjacent townland of Scart in 1840.[8]  Its local importance as an historic market centre helped Kildorrery survive during the Famine when smaller villages were decimated.[9] Its population actually increased by 30% during the decade of 1840-1850.[10] A national school was built in Scart during the height of the Famine in 1847.

Springvale House in Kildorrery was occupied by Roger Bourke in 1814 and in 1837 by his son, Roger S. Bourke. [12] The 1842-1843 County and City of Cork Post Office General Directory lists Thomas Baity, Esquire, at Springvale.[13] By the early 1850s, William Baily was the resident of Springvale House who held the property from the Earl of Kingston. George Grehan then purchased the property in 1855 after the height of the Famine, and recruited his agent, John J. Therry, to live there.[14] In 2020, Springvale House was a satellite branch of the Blackwater Veterinary Clinic .[15]

Another big house in nearby Farrahy, which came to be known as Bowen’s Court, was opened by Henry Cole Bowen in the 1770s. Henry lived there with his wife and first cousin, Margaret; they survived an attack on the estate during the 1798 Rebellion. In the 1840s, their grandson, also Henry Cole Bowen, “served as magistrate in Bandon.”[16] At the time of Griffith’s Valuation in 1852, Mrs. Eliza Bowen held the property valued at £75.[17]

According to EISB records. Ellen Keefe and Michael Carroll not only had strong ties to Kildorrery and to Carmansville in New York’s Twelfth Ward, but they emigrated together too.  Ellen Keefe, nee Dwyer from Grawn [sic], emigrated on the Washington in 1851.  In New York, she worked as a servant and met her husband, Denis, in the year and a half before she opened her savings account in August of 1852. Fellow Kildorrery native, Michael Carroll, travelled with Ellen Dwyer on the same Washington voyage. Built in 1850, the Washington was a new 1,654 ton ship sailing for the Black Star Line out of Liverpool. It arrived in New York on March 31, 1851 with 961 passengers under the command of Captain Pitkin Page. There were three births and two deaths on  this Atlantic crossing.[18]

[17] The estate was owned by the Bowen family until the 1950s. The deterioration and cost of upkeep led to the desertion of the estate by Elizabeth Bowen upon her mental breakdown. This is chronicled in Elizabeth Bowen’s Bowen’s Court and became known as Farahy or Faraghy a decade after its inception. Farrell, “What Remains of Bowen’s Court?”