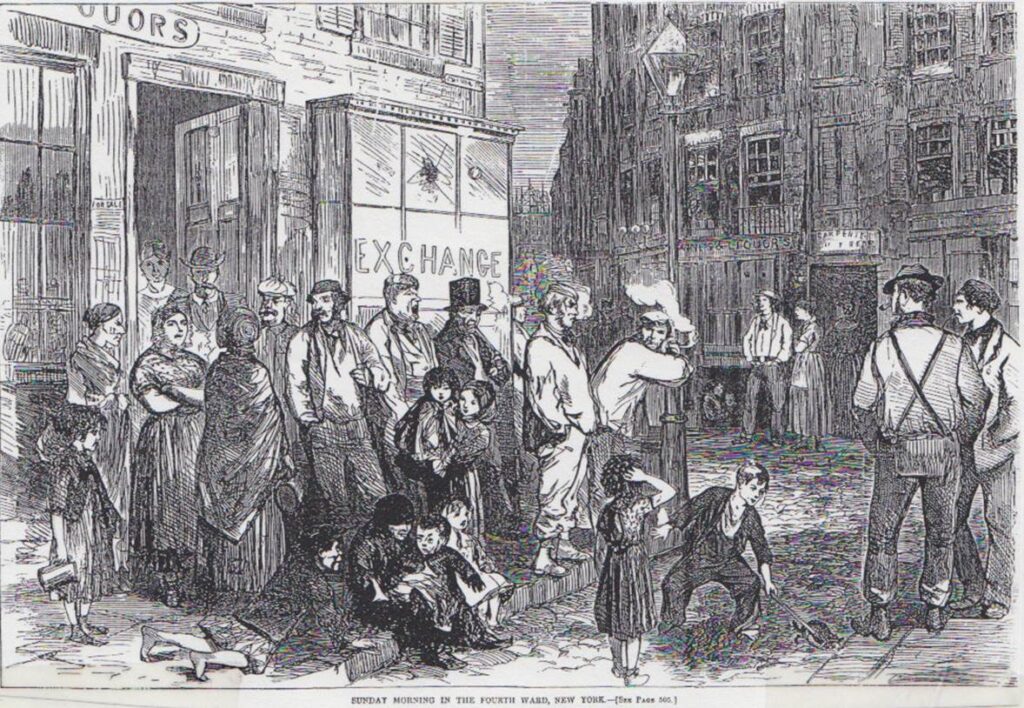 Sunday Morning in the Fourth Ward. From Harper’s Weekly, August 8, 1868.

Between the seventeenth and nineteenth centuries, drinking in Ireland became significantly more regulated by the British government[1].. As the centuries progressed, drinking became embedded in a variety of institutions, including the economy, family, school, and local politics. Not only did alcohol govern occupational interactions, but is subsequently became a marker of male identity and a means of governing interactions within the male group. 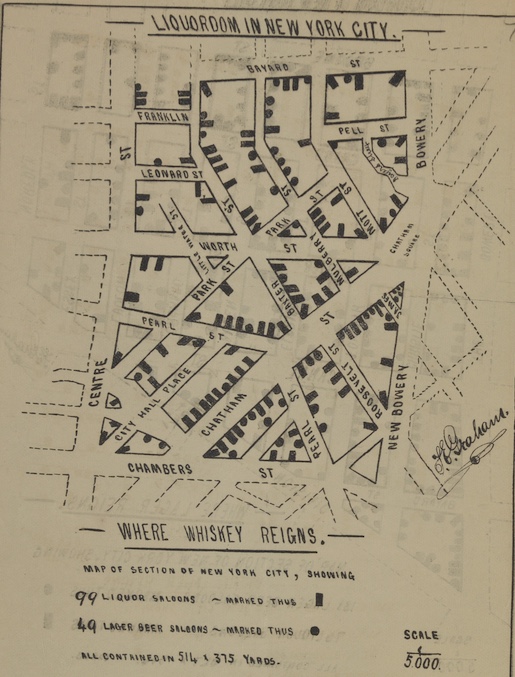 The setting where male interactions regarding politics, work, and family life took place was the public house. The public house was a center for news, meetings for politicians and workers, and release from daily life. Social events such as weddings, births, and funerals always included alcohol, and the substance was noted for its nutritional benefits. Drinking also served as a rite of passage, as young men were initiated into the male group upon their first drink at the public house[2]. Alcohol and socialization essentially became synonymous, and this trend continued in America as the public house played a critical role in the social lives of the Irish.

Hard drinking served an essential role in the male group, promoting equality among men regardless of differences in class. Upon entrance to the public house, a man would be obligated to purchase a drink for all other men in his company. A man’s ability to hold his liquor was attributed to manliness, and hard drinking was associated with high status within the bachelor grou[3]. In other words, cultural drinking was not about obtaining a state of drunkedness, but serves the purpose of reinforcing social bonds. By 1850, pubs in Ireland were well established and a number of pubs to people ratio grew in the wake of the Famine[4].

During the mid nineteenth century, as immigrants from throughout Europe began flooding into New York City, glasses of beer, wine, and liquor also began overflowing. Liquor proliferated every step of the immigrant’s journey, from the passenger ship, to the boardinghouse, to the ubiquitous taverns on every block. In 1855, the Wilson’s Business Directory lists eighteen porter houses on Mott Street alone[5]. On a five block stretch of Mott Street from Chatam Square to Grand Street, three liquor dealers, a tavern keeper, and a liquor store owner resided on Mott Street and held accounts with Emigrant Savings Bank. The 1855 census documents 891 Irish wine and liquor dealers out of 1,758 total of the foreign born, about half[6]. 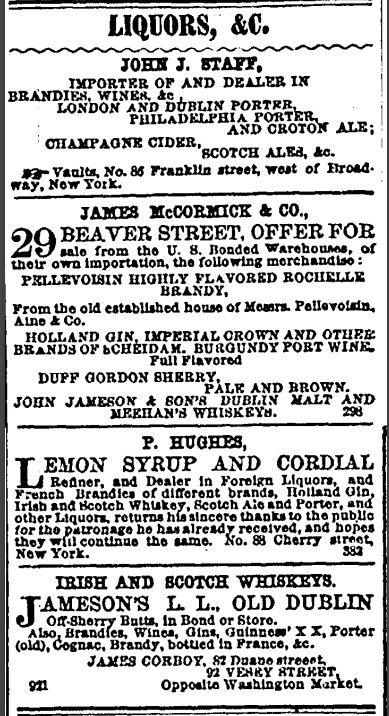 The surge in immigration during the nineteenth century gave rise to a heightened demand for alcohol. The demand in turn ignited the distilling and brewing industries as well as retail alcohol sales. Germans had a taste for beer and enjoyed their lager in beer gardens, the Irish whiskey and porter, and the French wine and brandy[7].Despite the regularity of illegal drinking establishments, numerous naturalized citizens held legal liquor licenses[8]. Ownership of a tavern was often a means of significant upward mobility. Breweries throughout the city fueled the liquor demand and the thirst was seemingly never quenched.

The tavern was not only the realm of sociality for immigrants and New York natives, but it was also a critical venue for politics and reaffirming working class attitudes. However, excessive drinking bred violence that although reinforced male working-class identity for the Irish, it also led to significant arrests ad problems. For instance, Richard Roland of 97 Mott Street fell under unfortunate circumstances when he was found drunk by a policeman, abandoned by his friend who had given him the liquor[9]. Nevertheless, alcohol was ubiquitous on Mott Street as a result of a heavy thirst from working-class males and was kept readily available through distribution from liquor dealers and local breweries.